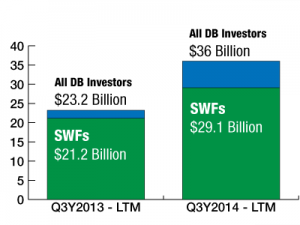 In September this year, Norway’s sovereign wealth fund, in one giant swoop paid US$ 1.5 billion for minority interests in two Boston properties and the former Citigroup Center in Manhattan. The amount of capital floating en route for core real estate is astonishing, more and more sovereign funds are allocating toward properties. In fact, for public institutional investors, real estate is one of the top sectors of direct investment. According to the Sovereign Wealth Fund Transaction Database, comparing the period of September 30, 2014 going back 12 months, total direct public investor transactions in real estate were US$ 36 billion compared to US$ 23.22 billion for transactions starting at September 30, 2013 going back 12 months. Limiting the database universe to sovereign wealth fund direct transactions exclusively, by comparing figures in similar periods, the figures are US$ 29.11 billion for 2014 versus US$ 21.15 billion for 2013. Currently, with regard to the Sovereign Wealth Fund Transaction Database, sovereign wealth funds make up the majority of transactions, thus the number of total public institutional investor transactions in properties should be much higher.

Sovereign wealth funds and pensions are at risk of a supply drought in core properties. With higher real estate fund commitments and deployment amounts, an unprecedented level of demand is being created by large public institutional investors. This trend could be exacerbated if U.S. defined contribution retirement accounts make the push into real estate assets.