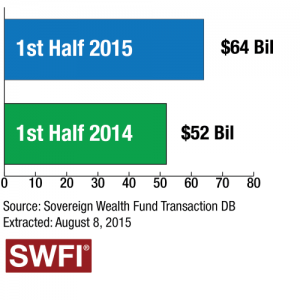 Whereas over a two decades ago, these institutional investors heavily relied on commingled real estate funds, today wealth funds are competing against them in varied instances or taking on separate account programs. Real estate managers competing for core properties in markets fear that wealth funds and some Canadian pensions are fine with acquiring prices at unjustifiable cap rates. Sovereign wealth funds exhibited a greater preference toward direct real estate investing in the first half of 2015 at US$ 17.1 billion versus 1H 2014 at US$ 9.8 billion. A few notable deals in the first half of 2015 include the Investment Corporation of Dubai (ICD) picking up some hotels – notably the W Hotel in Washington, D.C. and the Mandarin Oriental in New York.

For deal flow, sovereign investors exerted influence on their positions as limited partners at name brand private equity firms. Firms like the Blackstone Group, 3i and Thoma Bravo, consider sovereign funds to be helpful sources of capital when deals need an extra shot of financial juice. Total control of a target company tends to be an afterthought in most cases. In 2015, wealth fund investors participated in a number of large buyout deals. For instance, one deal is the May 2015 transaction of investing in the merged company merging O2 U.K. and Three U.K. called Hutchison 3G UK Holdings (CI) Ltd. This mega U.K. telecommunications deal attracted massive pension allocators like CPPIB and Caisse de dépôt et placement du Québec (CDPQ), but also two major sovereign funds – GIC and ADIA.

With wealth funds controlling greater ownership percentages in companies, the topic of corporate governance has taken center stage at Norway’s Government Pension Fund Global (GPFG). Norway’s GPFG is managed by Norges Bank Investment Management (NBIM) which is a division of Norges Bank, the country’s central bank. NBIM is headed by Yngve Slyngstad, twice making it on the Public Investor 100 (2013 and 2014), is known as a philosopher or deep thinker by his colleagues and peers. As the GPFG owns greater proportions of listed companies, corporate governance is moving toward the driver’s seat. Many large public institutional investors outsource corporate governance to proxy firms like ISS. NBIM is embracing a different approach, taking the first step of revealing their voting intentions at annual meetings (showing the vote results post-meeting.) NBIM plans to give the corporate world a more convenient heads up by issuing a series of position papers to clarify their stances. In an interview with the Financial Times in early August, Slyngstad made it clear “that he does not want investors to usurp the traditional role of the board.”