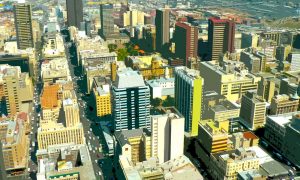 South African insurer Old Mutual Ltd.’s earnings are out, and it isn’t a pretty picture. Old Mutual announced that it suffered a 12% drop in adjusted full-year profit. The hoped-for 2018 targets were missed, and their local economy remained anemic. Though Old Mutual is the second biggest insurance company in the country, it was unable to thrive against this sullen backdrop. Old Mutual sought to appease shareholders and potentially benefit from the swoon in the stock price with a US$ 138 million stock buyback. The company has lost nearly a third of its value since listing in Johannesburg less than one year ago. South Africans are not making their premium payments, and currency devaluation made for a difficult year in Zimbabwe. Earnings per share fell to US$ 0.16, down from US$ 0.18 a year earlier, when it was still working to shed its former conglomerate structure. The growth target of gross domestic product growth plus 2% was also missed. Operating profit fell 4% as well. South Africa’s GDP growth was a disappointment at 0.8%.

[private_standard]Old Mutual CEO Peter Moyo hoped to see the share price rise with the buyback, and restore confidence in the company. “It would be good,” if it did, he mused. Sales of Latin American units will bring some short term cash into the company, which can be used for the buybacks. Moyo drummed up optimism after the news was announced, proclaiming “Whilst we continue to see economic headwinds in the near term, our group is resilient, well capitalized, and managing its costs tightly.” In January, a profit warning was issued by the company, dropping a bomb on shareholders: The Board brings to the attention of the public that the earnings for the current financial year are expected to be lower by at least 25% than the earnings reported for the same period in 2017 . . . Investment income has been negatively impacted by the poor performance of the equities market in the second half of the year and the impact adverse valuations on our properties in Kenya and South Sudan due to lower than expected rental yields and occupancy.” A new head of investor relations was also announced prior to earnings, Sizwe Ndlovu. Ndlovu will succeed Patrick Bowes, who is leaving the company at the end of this month.