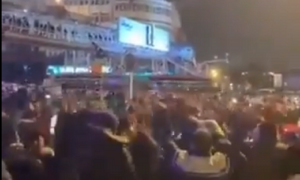 Western Tensions with Iran Grow in the First Month of 2020

After the violent Islamic Iranian revolution of 1979, the United States government has been at odds with Iran. Since the conclusion of the Iraq war of the 2000s and the end of U.S. military occupation, Iranian militia groups and factions have gained tremendous influence within Iraq, creating a possible, future vassal state. In recent months, the Iranian government shot down a U.S. drone, while capturing and returning U.S. navy sailors in the Gulf, while Western powers seized Iranian tankers and levied more economic sanctions.

The tit-for-tat tactics culminated in Iraq’s state-sponsored Popular Mobilization Forces paramilitary collective and others storming the gates of the United States embassy in Baghdad. The embassy was not breached, but a clear message was sent that the U.S. was not welcome by pro-Iranian forces in Iraq. The U.S. government had intelligence that Iran was going to make strikes at U.S. targets. The United States acted and carried out a drone strike to take out Iranian General Qassem Soleimani, the head of the Islamic Revolutionary Guard Corps Quds Forces, in Baghdad. The killing of the general rallied some Iraqis who grew tired of Iran’s expanding influence in Baghdad, while giving juice for Iran’s leadership to plot a counterattack. The killing of Soleimani, who was responsible for IED attacks on U.S. soldiers in Iraq during the war, raised the ire of prominent left-wing activists in the U.S., claiming World War III was starting (according to Twitter’s popularity algorithm).

Iran launched a counterattack firing missiles at U.S. army positions in Iraq. A Ukraine Boeing 737 passenger plane was shot down by the Iranian military in Tehran’s business district on January 11, 2020, killing everyone on board, including women and children. The Iranian government initially denied it was responsible, but later admitted it was an accident. Once news the Iranian government admitted to the mistaken shooting of the Ukraine International Airlines Flight 752 passenger plane which killed 176 people, protestors erupted in Tehran and other Iranian cities. The protestors argued that the government lies about America being the enemy when they have problems with Iran’s leadership. The Iranian government even arrested the U.K. ambassador Robert Macaire over taking photographs of the protests against the Iranian regime.

“The arrest of our ambassador in Tehran without grounds or explanation is a flagrant violation of international law,” Britain’s Foreign secretary Dominic Raab said in a statement.

“The Iranian government is at a crossroads moment. It can continue its march towards pariah status with all the political and economic isolation that entails, or take steps to de-escalate tensions and engage in a diplomatic path forwards,” the statement continued.

In a second day of protests, Iranian police and guards came out in full force to quell protests. 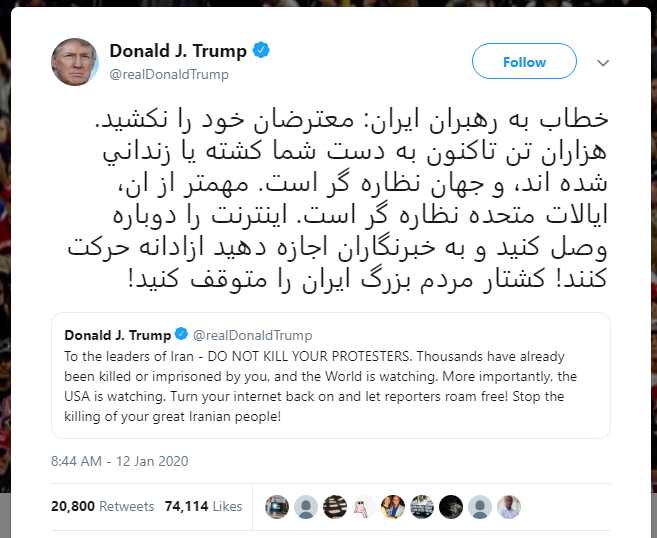 On January 12, 2020, U.S. President Trump tweeted, “To the leaders of Iran – DO NOT KILL YOUR PROTESTERS. Thousands have already been killed or imprisoned by you, and the World is watching. More importantly, the USA is watching. Turn your internet back on and let reporters roam free! Stop the killing of your great Iranian people!”

Qatar’s Emir Sheikh Tamim bin Hamad Al Thani visited Iranian President Hassan Rouhani on his first official trip to Iran to de-escalate regional tensions. Qatar is hosting the 2022 FIFA World Cup in November 2022 and they paid a big price to get it, along with the FIFA scandal which embroiled a number of people linked to powerful politicians. 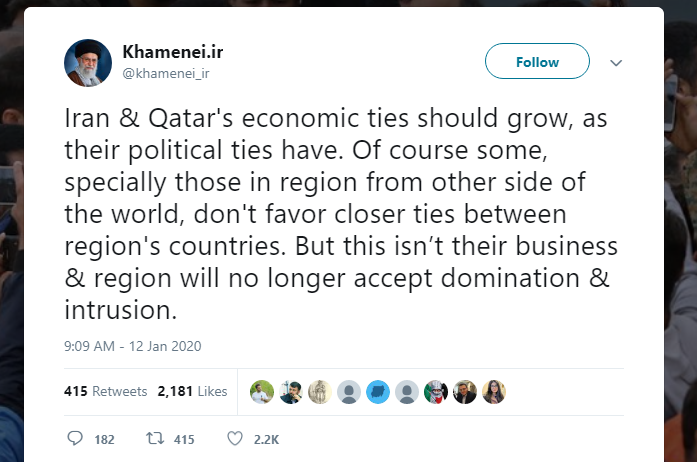 Iran’s Ayatollah Khamenei tweeted on January 12, 2020, “Iran & Qatar’s economic ties should grow, as their political ties have. Of course some, specially those in region from other side of the world, don’t favor closer ties between region’s countries. But this isn’t their business & region will no longer accept domination & intrusion.”