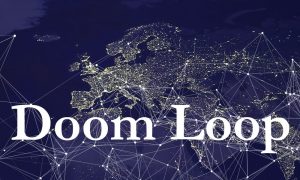 What is a Doom Loop in the Context of Economics?

During the European area sovereign debt crisis of 2011-2012, the doom loop was primarily domestic as banks were home-biased in their asset allocation, making them exposed to domestic sovereign risk. During the sovereign debt crisis, home bias for banks increased. In 2020, Italian banks remain economically vulnerable due to their significant holdings of Italian sovereign debt. In fact, Italy’s government debt to gross domestic product (GDP) ratio is roughly 135%.