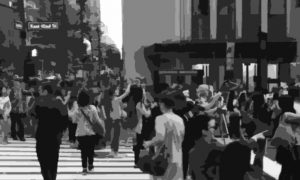 Landlords in New York are asking for local government approval for a 2.5% to 5.5% raise in the cost of rent-stabilized apartments per year. A landlord spokesman blasted “another politically-motivated rent freeze.” In general, these are hard times for real estate. Across the country in Seattle, a Times headline read: “Coronavirus wallops Seattle-area home market, knocking down sales and prices.” A rent-eviction ban has been prolonged for 6 additional months. The holiday season will likely prevent mass evictions in December. It is now possible to avoid paying rent in Seattle for 9 months in 2020 before even facing the threat of eviction. Many legal unknowns are confusing both tenants and landlords.

Despite the troubled waters, the National Pension Service of Korea made inroads in New York, combining with Hines in a US$ 492.2 million deal that involves a total of US$ 2.3 billion to develop One Madison Avenue with seller SL Green. Another project, at Grand Central Terminal, has SL Green partnering with both organizations to build an office tower which is already under construction. South Korea’s Pension fund will depend on the success of real estate, as it reported potential losses of US$ 20.3 billion in the national stock market this year. The pension has been investing in toll roads as well, joining a coalition to purchase a majority stake in Portugal’s US$ 3.26 billion Brisa. Investments of all kinds are gaining speed in South Korea. Retail investors in Korea have changed their tune from last year and deployed nearly US$ 40 billion into the nation’s stock market in 2020.