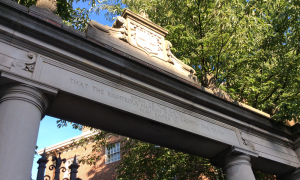 Another budget crisis is upon American colleges, and they are doing whatever they can to keep their massive endowments from being raided. Harvard’s US$ 40.9 billion endowment is in danger, even as Harvard accepted US$ 8.6 million from the U.S. government’s CARES Act. Endowment returns for 2019 were below expectations, at 6.5%. Harvard was urged by its own high-profile graduate, U.S. Senator Ted Cruz, to “Give the money back.” Commissioner of the Federal Communications Commission Brendan Carr called the government allocation to ultra-wealthy Harvard “an embarrassment and a failure.” Harvard management retorted that the endowment had taken a hit in the market downdraft and that it is entitled to some of the CARES Act cash. The endowment has spent several years under President and CEO Narv Narvekar offloading natural resource investments in Brazil and Australia which drew protests from environmentalists. In the end, Harvard decided to give the money back.

At Brown University, with its US$ 4.2 billion endowment, returns came in at 12.4% in 2019. Providence’s WPRI reported on a lawsuit facing the institution: “The students demand repayment for their tuition, room and board, and other costs related to the disruption COVID-19 closures caused to their spring semester. They said by paying for the semester and not receiving what they expected from that payment, this was considered a breach of contract.” A firestorm is brewing as the New York Times’ Ron Lieber notes: “Administrators have held fast to the idea that nobody should get back any of their tuition payment. The strange thing about this stance is that the colleges know that many people aren’t getting full value for their dollar.” Brown is reportedly not sure whether to accept US$ 4.8 million that it would be due under the CARES Act.

The University of Pennsylvania made in clear that it had no interest in the US$ 9.9 million it would receive under the CARES Act. Its endowment is US$ 14.7 billion. The longest-serving president in the history of the college is Amy Gutmann. She enjoys a salary of US$ 3.6 million per year. Her area of expertise is political science. Yale University, with US$ 30.3 billion, will also refuse the CARES Act funding. Cornell, like Penn, is an outlier in the Ivy League, planning to take the US$ 12.8 million allotted to it. Cornell has a US$ 11 billion endowment. The current, presumably weakened state of the world’s largest college endowments has not yet been tallied.

Endowments are split up over many accounts and disbursed for different purposes. College budgets are drawn up in a similar way, which is why a college might have money for new construction but not enough for other needs. The bulk of the classes are thus taught by part-timers without a vested interest in the institution, its reputation, or even the quality of the education being provided say educators surveyed by SWFI. Colleges are now moving to reduce costs. Harvard is not hiring new faculty, in line with other institutions. It will postpone refurbishing and other projects. However, a new Athletic Director search will continue. Across the country, pay freezes and marginal salary reductions for high administrative staff are becoming widespread. Layoffs for some employees are also being planned in many institutions.