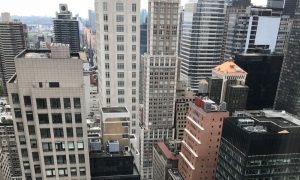 NYCERS is not currently returning phone calls according to sources who have tried to reach them, says the Daily News. With employees working from home, no one is manning the desks, leaving only email. Some of NYCERS’ bereaved spouses are juggling their bills, and the lack of funding is causing distress in their personal finances. Some of them might not be due anything.

There is a question of how much or even whether NYCERS will be required to pay family members of coronavirus fatalities, especially if the death is not job-related. If an employee were to catch coronavirus on the job and it could be demonstrated, survivor payouts would be due. Newer rules, specifically Chapter 89 of the 2020 laws, outline the potential for survivors to receive cash. There is a hurdle to climb though, the benefit only applies if the “member reported for work outside their home and contracted COVID-19 within 45 days after reporting for work, and whose death was caused by COVID19 or where COVID19 contributed to such member’s death.”

On July 8, 2020, NYCERS came out with an update: “NYCERS has made significant temporary operational changes in order to continue serving our members while keeping our staff safe in the midst of the COVID-19 pandemic.” NYCERS admits that the customer service center is still closed with no plan to open it in sight, but there is a hotline for members to call during the week. It is apparently this hotline that is not directing members to helpful information. The only option is to wait: “The Medical Board is still reviewing cases and making determinations based on the documentary evidence where possible. Some applicants will be scheduled for an interview and examination via video conference.”

Applicants who wish to sue the pension will find they cannot be served in person at this time: “NYCERS’ offices are currently closed. As a result, NYCERS will not accept personal service of process until the office reopens.” NYCERS provided an email address through which legal documents could be sent. No phone number or personal contact information was supplied. NYCERS has been working for two years on its “Customer Relationship Management System.” It was meant to “offer multiple channels (e.g., email, chat, and text messaging) by which our members and retirees can interact with NYCERS,” according to NYCERS.

NYCERS’ Executive Director is Melanie Whinnery. She was selected for the job in August 2017. Whinnery is an alum of Marist College in New York. She began working with the retirement system as a Director of Administrative Services. She then became Director of Member and Employer Services and Deputy Comptroller. In this role she writes that she was “Chief Operating Officer for the third largest and one of the most complex retirement systems in the country.” And she had the “Leadership to implement the programs necessary to achieve the Comptroller’s vision.” Under Whinnery’s direction, NYCERS won the “Recognition Award for Administration 2019” from the Public Pension Coordinating Council.

NYCERS was 72.2% funded at last check in 2017, although a more current estimate from NYCERS on its pension benefit obligation would change the calculation and perhaps reduce this figure. In fiscal year 2019 NYCERS returned less than its benchmark of 7.73%, pulling in 7.13% returns, according to Whinnery. NYCERS’ benefits fund had amassed assets of US$ 68.9 billion (restricted for benefits) in 2019, with US$ 73 million in cash. Member contributions for the year came in at nearly US$ 548 million. Employers contributed US$ 3.69 billion. Interest and dividend income exceeded US$ 1.9 billion. Investment appreciation tipped the scales over US$ 2.7 billion in 2019. Benefit payments and withdrawals were US$ 5.26 billion, leaving a US$ 3.33 billion profit on the year after expenses.

NYCERS is significantly exposed to worldwide stock markets, with 46% of its assets in equities. It has US$ 20.98 billion in domestic equities and US$ 13.13 billion in international equities. US$ 25 billion is in fixed income. Other large positions are in the following: US$ 3.56 billion is held in private real estate. Private equity has US$ 4.66 billion of NYCERS’ assets. Opportunistic fixed income has an allocation of US$ 1.9 billion. Corporate and other debt securities make up US$ 5.9 billion. Mortgage debt securities are US$ 2.43 billion. TIPS (as debt securities) account for US$ 2.39 billion. U.S. government and agency debt is US$ 8.48 billion. The total assets held by NYCERS at fiscal year end 2019 was US$ 74.555 billion.

NYCERS is a dedicated fan of tech stocks. The single largest equity holding by value is Microsoft with 4,386,334 shares. It made up 2.8% of domestic equities holdings. Apple followed with 2,847,009 shares for 2.69% of equity holdings. Third on the list was Amazon at 224,334 shares and totaling 2.03% of equity shares. Alphabet/Google, Facebook, Berkshire Hathaway, Johnson & Johnson, JP Morgan, Exxon, and Pfizer round out the top 10. The largest bond holding by far is US$ 10.3 billion in U.S. Treasury Securities, with 52.03% of NYCERS’ long term fixed income allocation. FNMA Securities are 5.32% of the category, a position of US$ 1.05 billion. GNMA Securities are worth US$ 578.7 million at 2.92%, and Federal Home Loan Mortgage Corporation has a US$ 482.9 million position making up 2.44%. Other holdings are less than 1% except AFL-CIO Housing Investment Trust with US$ 327.68 million for 1.66% of the long term fixed income portfolio.