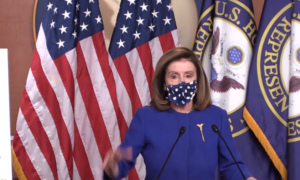 Global institutional investors are trying to figure out who will win the 2020 U.S. Presidential election and the policies that come with it. Many polls indicate a Joe Biden win, but polls were wrong on Brexit and Donald Trump winning in 2016. With the October surprise of U.S. President Trump testing positive for COVID-19, allocators are scratching their heads on what 2021 will be like. As SPACs have gained popularity by former corporate CEOs, hedge funds, and private equity honchos, alternative methods of achieving results are sprouting into the U.S. world of politics. The norms of typical presidential elections in the United States are being ignored in 2020 with cancelled onsite conventions in preference of web shows, the Commission on Presidential Debates cancelling the October 15th debate, and extending voting periods beyond traditional norms.

Weeks before the U.S. Presidential election, Congressman Raskin and U.S. House Speaker Nancy Pelosi, a Democrat from San Francisco, introduced the Commission on Presidential Capacity to Discharge the Powers and Duties of Office Act. Democrats see this as a way to possibly remove Trump under the 25th amendment, while Republicans see these as a ploy and possible future move to remove U.S. Vice President Joe Biden should he win. Both Trump and Biden are over the age of 70, with Biden being 78. Pelosi’s legislation seeks to form a commission that would allow Congress to intervene under the 25th Amendment, which lays out in the U.S. Constitution a process by which a sitting president can be removed from office. Pelosi pushed the idea that the commission has nothing “at all” to do with the November 3, 2020 elections and did not pertain to a specific person when prompted by reporters. That same day, Trump tweeted back, “Crazy Nancy Pelosi is looking at the 25th Amendment in order to replace Joe Biden with Kamala Harris. The Dems want that to happen fast because Sleepy Joe is out of it!!!”

House Speaker Pelosi has a tense relationship with U.S. President Donald Trump. Pelosi held hearings to push the Muller report and impeached Trump over a phone call with Ukraine officials. The partisan impeachment further divided the nation. The impeachment effort failed in the U.S. Senate, acquitting Trump. The impeachment trail overshadowed the dangerous efforts and early spread of the coronavirus. COVID-19 shook social, business, and cultural norms, while the racial and political movements like BLM and Antifa have rocked cities over concerns of racial justice, defunding or reforming police departments, and anti-capitalism. The protests and riots occurred in a time where there were lockdowns on gatherings, sporting events, and churches.

U.S. Senator Kamala Harris from California was competing against former Biden in the Democrat primary. Harris dropped out after failing to gain traction among Democrat primary voters, while Biden struggled but eventually beat out Senator Bernie Sanders after he won a decisive victory in the South Carolina. Biden is perceived to be a more centrist Democrat; however, some voters are concerned with his age – 78 and there is a library of videos out in the public showing the former Vice President misspeaking, forgetting lines, and having visibly shaking hands. In February of 1988, Biden suffered two life-threatening brain aneurysms and in 1988 withdrew his bed for the presidential race. Politically speaking, Kamala Harris and Pelosi are from California, representing Silicon Valley, and a state that is deep in debt, and the more left part of the Democrat party versus Joe Biden. Pelosi also claims that Trump is being medicated and it’s impacting him.

This all ties back to how institutional investors are preparing for different scenarios, in which a lot of capital remains locked into the U.S. economy. The issues for large pools of public fund capital include: U.S.-China trade relations, COVID-19 procedures and lockdowns, taxes, the New Green Deal, and regulations.

Section 1
In case of the removal of the President from office or of his death or resignation, the Vice President shall become President.

Section 2
Whenever there is a vacancy in the office of the Vice President, the President shall nominate a Vice President who shall take office upon confirmation by a majority vote of both Houses of Congress.