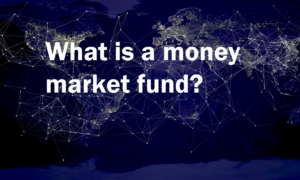 What is a Money Market Fund?

Definition of a Money Market Fund
A money market fund is a type of mutual fund that invests in highly-liquid, low-risk near-term instruments. These instruments include the following: cash, cash-equivalent securities, and high-rated fixed income securities with a short term maturity (example: U.S. Treasuries). Money market funds were designed to give investors high liquidity with a very low level of risk. Investors invest in these funds to manage cash or short-term savings. Money market funds are not FDIC insured, unlike money market accounts.

These funds behave like a mutual fund by issuing redeemable units or shares to investors.

Money market mutual funds were first developed in the 1970s. In 1970, Bruce R. Bent and Henry B. R. Brown established the first money market fund called the Reserve Primary Fund. It was managed by Reserve Management Company. The fund was launched with no sales force or advertisements, and instead relied on phoning investment advisers and handing out brochures. At its peak, the fund held more than US$ 60 billion in assets. In 2006, the Reserve Primary Fund made the decision to purchase commercial paper, an asset class that Bent had dismissed as recently as 2001. By early 2008 asset-backed and financial-sector commercial paper made up 56% of its portfolio. During the global financial crisis of 2007-2008 it lost dollar value, or “broke the buck,” and was liquidated as a result. The Reserve Primary Fund ceased operations on September 17, 2008.

There are a number of types of money market funds. These include Government Money Fund, Prime Money Fund, Treasury Fund, and a Tax-Exempt Money Fund (Municipal Money Market Fund).

Money market accounts are a type of savings account offered by banks and credit unions. These accounts were introduced in the early 1980s in a bid to compete with money market funds.

Money market accounts in the United States are insured by the Federal Deposit Insurance Corporation (if you get one at a bank) or the National Credit Union Administration (for credit unions). Account holders will not lose their deposits (up to US$ 250,000 insured per depositor) even if the financial institution goes out of business. Traditionally, money market accounts also offered higher interest rates than regular savings accounts. However, due to recent low interest rates with the Federal Reserve, the rates are similar in 2020.