On November 12, 2020, U.S. President Donald Trump issued Executive Order 13959. The U.S. government sees that China is increasingly exploiting United States capital to resource and to enable the development and modernization of its military, intelligence, and other security apparatuses. The EO is causing Wall Street banks some profit pains, forcing them to pull the plug on hundreds of products to comply with the U.S. ban on several Chinese businesses that have ties to the Communist Chinese Military Companies (CCMCs). Goldman Sachs Group Inc., JPMorgan Chase & Co., and Morgan Stanley will delist certain products, numbering around 500 structured products in Hong Kong, over the course of January 2021, according to Hong Kong Stock Exchange filings. MSCI Inc. deleted the stocks from its global benchmark indexes on January 8, 2020.

The executive order prohibits U.S. Persons from purchasing “publicly traded securities” of 35 Chinese companies identified as Communist Chinese Military Companies (CCMCs) or engaging in any transaction in “any securities that are derivative of, or are designed to provide investment exposure to” prohibited CCMC securities. Under the Executive Order, U.S. Persons cannot make purchases of CCMC securities effective January 11, 2021 and have until November 11, 2021 to divest from these securities.

State Street Global Advisors, part of State Street Corporation, said in a statement that its Hang Seng index tracker TraHK will no longer invest in businesses deemed to be affiliated with or supporting the Chinese military that have been sanctioned under President Donald Trump’s EO 13959. BlackRock informed clients that its iShares ETFs have also been adjusted in accordance with the underlying indexes response to the sanctions on Communist Chinese Military Companies. After flip-flopping numerous times, the New York Stock Exchange (NYSE) banned Chinese telecommunication companies to comply with the executive order.

On December 28, 2020, the U.S. Treasury Department’s Office of Foreign Assets Control (OFAC) issued requirements regarding restrictions and processes in connection with the Executive Order. OFAC’s guidance restricts U.S. Persons from investing in securities in any foreign or U.S. fund, including registered funds that hold publicly traded securities of a CCMC. OFAC also confirmed that the prohibitions on CCMC securities do not apply to securities of subsidiaries unless and until the subsidiary is listed by OFAC, in which case the prohibitions will take effect 60 days after the subsidiary is listed by OFAC.

President Trump also signed an executive order in January 2021 banning transactions with eight Chinese payment apps, including Alibaba affiliate Ant Group’s Alipay and Tencent Holdings Limited’s digital wallets. Trump is handing over these orders to U.S. President-elect Joe Biden in whether to enforce all these measures. The executive order directed the Commerce Department to draft rules outlining which payments and transactions will be outlawed, will impact Tencent’s QQ, QQ Wallet and WeChat Pay as well as lesser-known apps CamScanner, SHAREit, VMate and WPS Office. 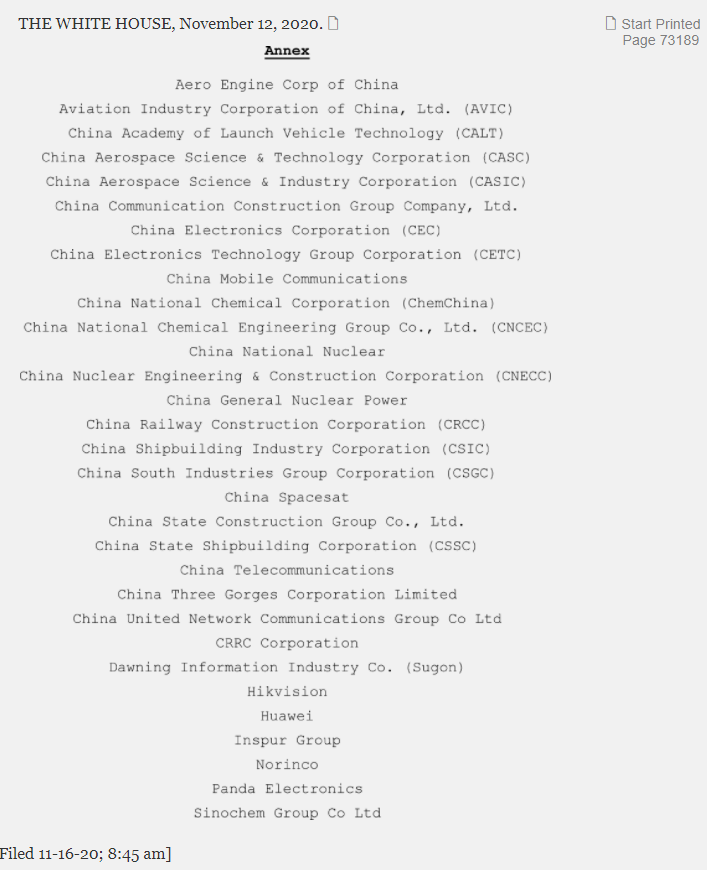