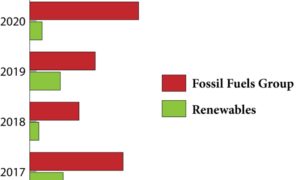 The wealth of the world’s largest sovereign wealth funds is substantially built from fossil fuels such as oil and gas. Following the logic that oil and gas pollution contribute to the global warming of the planet, sovereign wealth funds could be perceived as a financial contributor to climate change, similar to companies like ExxonMobil, BP Plc, and Chevron. Since 2008, Western policymakers and college professors have urged sovereign wealth funds to use their oil and gas wealth to fund renewable energy generation and technologies. Many academics and organizations like the OECD Development Centre view sovereign wealth funds, due to their size and market power, of possessing the ability to catalyze faster adoption of renewable energy to displace fossil fuels. Sovereign investors have supported and invested in solar and wind assets, but cautioned that investments must be commercial in nature. The Paris Agreement under the United Nations Framework Convention on Climate Change is a major international force changing the way institutional investors allocate their capital. The Paris Agreement’s goals requires an overall decline in the production and consumption of fossil fuels. This may result in a decline in revenue for those sovereign funds financed by oil and gas revenues, thus creating financial instability for these governments, which could lead to political changes. 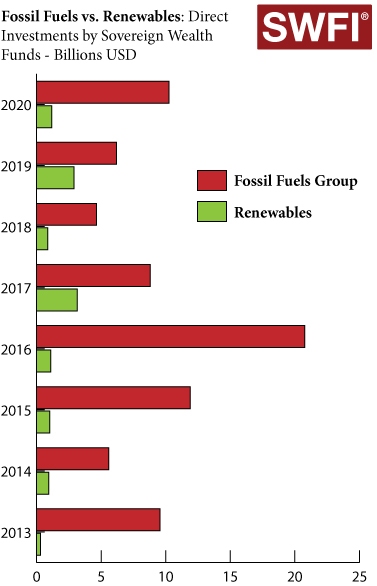 For example in 2020, sovereign wealth funds directly invested US$ 10.26 billion in the selected fossil fuel industry group, while investing US$ 1.17 billion in the renewables cohort. For 2019, sovereign wealth funds directly invested US$ 6.18 billion in the oil and gas comparable versus US$ 2.89 billion in the renewables group. From a diversification stand point, renewables could partially hedge the capital of these sovereign funds from a drop in oil price or sustained low price in oil. At the same time, the rapid adoption of low-carbon economies would come back to plague the fiscal budgets of these oil-based economies, at least in the short-to-medium term. Already, a number of Gulf countries and Latin American countries dependent on the price of oil have witnessed substantial distress in their fiscal budgets, coupled with the cost of the coronavirus pandemic.