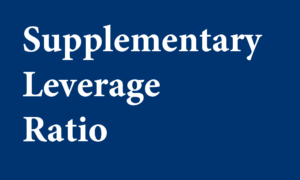 What is the Supplementary Leverage Ratio and Why is it Important?

SLR was introduced by the Basel Committee in 2010 and it was finalized in January 2014. Basel III reforms were aimed at banks and how they hold their exposure to derivatives.

In addition, banking organizations that will be subject to Category I standards, which are the global systemically important bank holding companies (U.S. GSIBs), as well as their depository institution subsidiaries, are subject to enhanced supplementary leverage ratio (eSLR) standards. The eSLR standards require each U.S. GSIB to maintain a supplementary leverage ratio above 5 percent to avoid limitations on the firm’s distributions and certain discretionary bonus payments and also require each of its insured depository institutions to maintain a supplementary leverage ratio of at least 6 percent to be deemed “well capitalized” under the prompt corrective action framework of each agency. On September 3, 2014, the Federal Reserve, Office of the Comptroller of the Currency (OCC), and the Federal Deposit Insurance Corporation (FDIC) released Regulatory Capital Rules: Regulatory Capital, Revisions to the Supplementary Leverage Ratio. The Federal Reserve, OCC, and FDIC adopted the SLR as a final rule.

The Basel Committee on Banking Supervision (BCBS) is a committee of banking supervisory authorities that was established by the central bank governors of the Group of Ten countries in 1974. The Basel Accords refer to the banking supervision Accords (recommendations on banking regulations)—Basel I, Basel II and Basel III—issued by the Basel Committee on Banking Supervision. They are called the Basel Accords as the BCBS maintains its secretariat at the Bank for International Settlements (BIS) in Basel, Switzerland and the committee normally meets there.

The Basel Accords is a set of recommendations for regulations in the banking industry.

The press release from 2020 said, “To ease strains in the Treasury market resulting from the coronavirus and increase banking organizations’ ability to provide credit to households and businesses, the Federal Reserve Board on Wednesday announced a temporary change to its supplementary leverage ratio rule. The change would exclude U.S. Treasury securities and deposits at Federal Reserve Banks from the calculation of the rule for holding companies, and will be in effect until March 31, 2021.

Liquidity conditions in Treasury markets have deteriorated rapidly, and financial institutions are receiving significant inflows of customer deposits along with increased reserve levels. The regulatory restrictions that accompany this balance sheet growth may constrain the firms’ ability to continue to serve as financial intermediaries and to provide credit to households and businesses. The change to the supplementary leverage ratio will mitigate the effects of those restrictions and better enable firms to support the economy.

As the Board has previously stated, financial institutions have more than doubled their capital and liquidity levels over the past decade and are encouraged to use that strength to support households and businesses. The Board is providing the temporary exclusion in the interim final rule to allow banking organizations to expand their balance sheets as appropriate to continue to serve as financial intermediaries, rather than to allow banking organizations to increase capital distributions, and will administer the interim final rule accordingly.

The supplementary leverage ratio generally applies to financial institutions with more than $250 billion in total consolidated assets. It requires them to hold a minimum ratio of 3 percent, measured against their total leverage exposure, with more stringent requirements for the largest and most systemic financial institutions. The change would temporarily decrease tier 1 capital requirements of holding companies by approximately 2 percent in aggregate.”