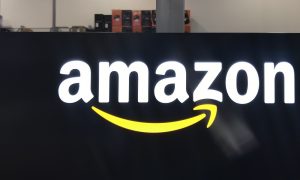 CULTURE: Amazon Fears Unionization, Calls Out US Senators over Hypocrisy

Controlling the Washington Post news business, Jeff Bezos is the wealthiest man in the world and founder of Amazon.com, Inc., an e-commerce giant that greatly benefitted from the COVID lockdowns, while many U.S. small businesses have fallen to the wayside. Amazon has done the unthinkable, alienating both Democrats and some Republicans. Republicans were once staunchly anti-union in their political beliefs, have transitioned under Trump into more of a populist, workers’ party as large U.S. corporations turned their backs to conservatives over the past years. Amazon is finding fewer friends on the right-wing part of America, as the U.S. Senator Marco Rubio wrote in a recent March 12, 2021 op-ed, “For the past several years, Amazon has waged a war against working-class values. The Silicon Valley titan uses anticompetitive strategies to crush small businesses, bans conservative books and blocks traditional charities from participating in its AmazonSmile program. Not surprisingly, it has also bowed to China’s censorship demands.

Amazon may be headquartered in America, but it considers itself a citizen of the world.

Now, the company is facing a unionization effort at its warehouse in Bessemer, Alabama.”

Amazon actively interfered in U.S. politics by shutting down the social media app Parler during the presidential transition of power. Amazon Web Services found examples of Parler of posts that “clearly encourage and incite violence”, while there have been studies that Twitter and Facebook posts that have led to far more encouragements of political violence. The big difference is that Parler had an audience that was far more right-wing leaning than Twitter or Facebook.

On the left-side of politics, Amazon has become emboldened to take on Democrats.

On March 25, 2021, U.S. Senator Elizabeth Warren tweeted, “Giant corporations like Amazon report huge profits to their shareholders – but they exploit loopholes and tax havens to pay close to nothing in taxes. That’s just not right – and it’s why I’ll be introducing a bill to make the most profitable companies pay a fair share.”

Amazon fired back, tweeting,” 1/3 You make the tax laws @SenWarren; we just follow them. If you don’t like the laws you’ve created, by all means, change them. Here are the facts: Amazon has paid billions of dollars in corporate taxes over the past few years alone.” 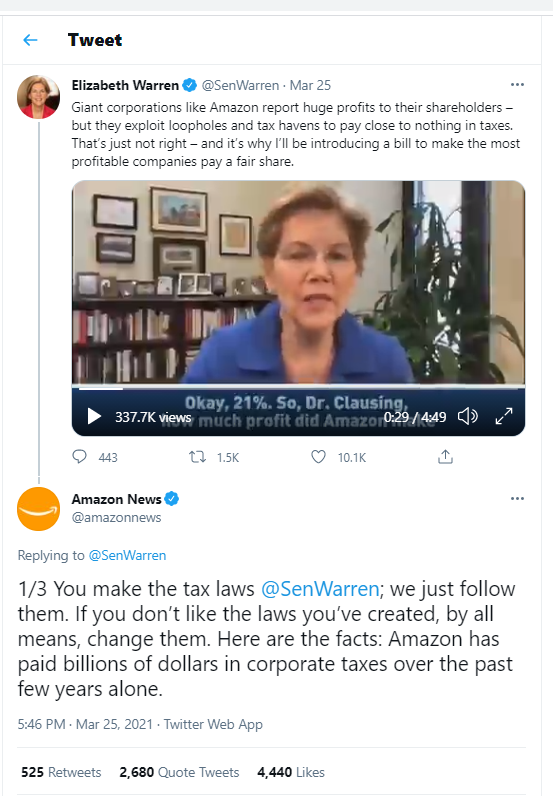 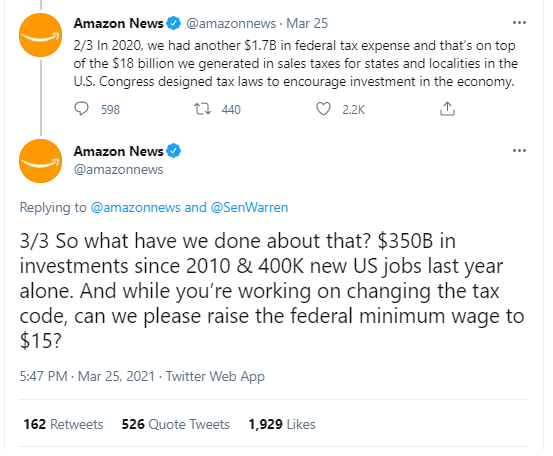 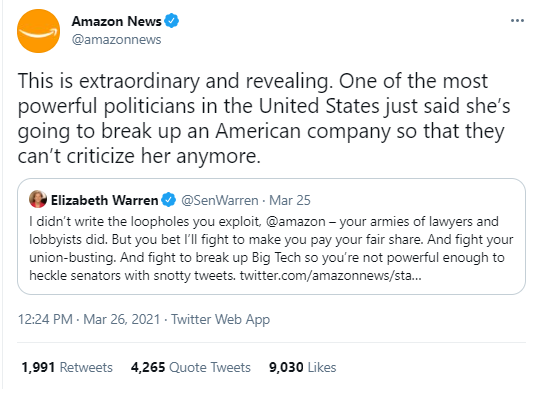 On March 26, 2020, Sanders tweeted, “In 2020, Amazon made $14 billion in profits during the COVID pandemic, but decided to stop paying hazard pay to workers. During that same time, Jeff Bezos saw his wealth grow by around $70 billion.” 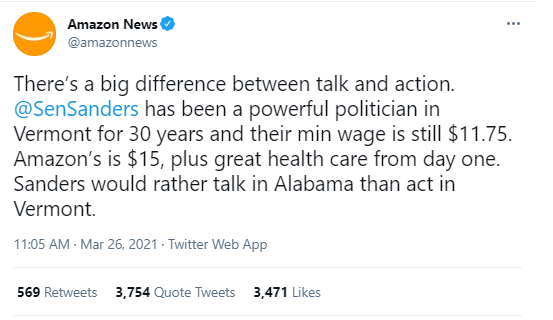 Sanders also liked that Amazon move to up its wages back in 2018. 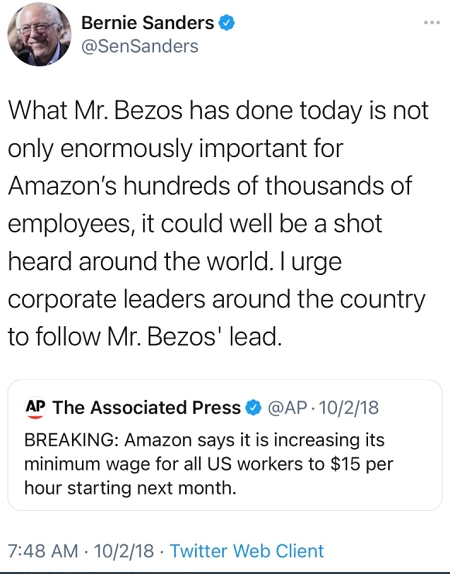 Why is all this news relevant?

Amazon is major component of shares held by pensions and some sovereign wealth funds. A negative public sentiment view could prompt legislation, forcing the behemoth to unionize. The move could force Amazon to split its cloud AWS business from the lower margin online retail business.