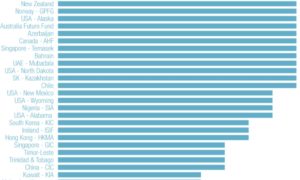 The Linaburg-Maduell Transparency Index (LMTI) is a widely used scoring benchmark system to rate the transparency of global sovereign wealth funds. From 2012 to 2018, global sovereign funds relatively maintained their transparency scores, while some wealth funds improved information disclosure. The trend shift on institutional investor transparency started to turn in 2018. Typically, when SWFs go from transparent to increasing opacity, it is a sign that there was some significant corporate governance change, macroeconomic turmoil in the country, a scandal, a poor performing portfolio, or a change in long-term goals.

Starting in late 2019 and into 2020, reporting updated information from sovereign wealth funds from the middle-range of LMTI scored funds was incomplete, causing a drop in scores. This is causing a wider gap from very transparent SWFs from sovereign investors that provide little information besides stated goals and a formal website.

SWFI research migrated the SGRF profile and created the Oman Investment Authority (OIA) giving the fund a score of 4 on the LMTI. Fundo Soberano de Angola (FSDEA), which is recovering after a major scandal and governance change, got a lower score of 3 from 5. FSDEA stopped reporting financials on its SWF. Saudi Arabia’s Public Investment Fund was lowered to a 6, as the fund’s financials, fund managers, and other allocation data remains hidden from the public. National Development Fund of Iran was lowered to a 4 from having not-updated financials. SAFE Investment Company was lowered to a 2. The Sovereign Fund of Egypt has an inaugural score of 4.

Turkey Wealth Fund is now a 6. Malaysia’s Khazanah Nasional Berhad dropped from an 8 in transparency to a 6. 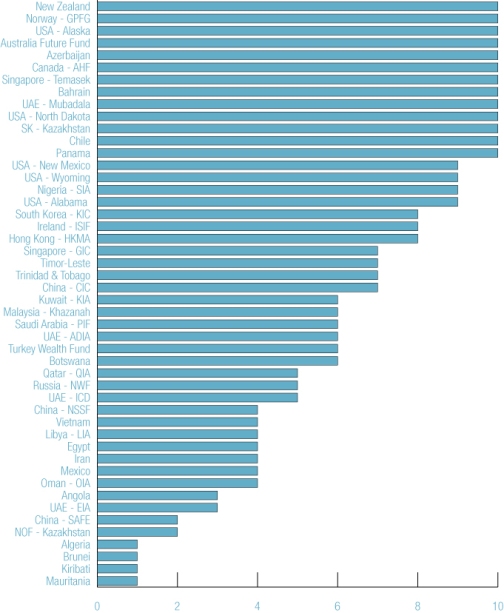 The Linaburg-Maduell transparency index is a method of rating transparency in respect to sovereign wealth funds. Pertaining to government-owned investment vehicles, where there have been concerns of unethical agendas, calls have been made to the larger “opaque” or non-transparent funds to show their intentions.