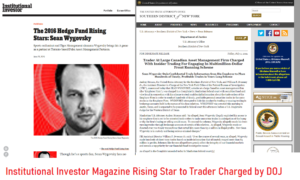 The United States Department of Justice filed charges in Manhattan federal court against Sean Wygovsky (age 40). The DOJ charged him with securities fraud and wire fraud in connection with his scheme to steal confidential information about the trade orders of his employer, Toronto-based Polar Asset Management Partners, in order to conduct hundreds of timely, profitable personal securities trades in the same stocks as Polar Asset Management Partners. Sean Wygovsky attempted to hide his conduct by trading or causing trading in brokerage accounts held in the names of his close relatives. Sean Wygovsky was arrested on the morning of July 2, 2021 in Austin, Texas, and is expected to be presented in federal court this afternoon before a U.S. Magistrate Judge for the Western District of Texas. Wygovsky is charged with one count of securities fraud, which carries a maximum sentence of 20 years in prison, and one count of wire fraud, which carries a maximum sentence of 20 years in prison.

Manhattan U.S. Attorney Audrey Strauss said: “As alleged, Sean Wygovsky illegally exploited his access to his employer firm’s yet-to-be-executed trade orders to make numerous trades in anticipation of the bump or dip the firm’s buying or selling would cause. To conceal the scheme, Wygovsky allegedly made his front running trades through brokerage accounts of certain of his relatives. As alleged, Wygovsky made or directed over 700 timely transactions that netted him more than $3.6 million in illegal profits. Now Sean Wygovsky is in custody and facing serious criminal charges.”

FBI Assistant Director William F. Sweeney Jr. said: “Over the course of several years, as alleged, Wygovsky made hundreds of short-term trades based on inside information that ultimately reaped more than $3 million in profits. Schemes like the one alleged here grossly affect the integrity of our financial markets and remain a top priority for our financial fraud investigative teams.”

Financial Transfers Back to Wygovsky