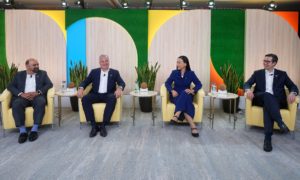 The COVID pandemic volatility shook the foundations of many state-owned investors. Singapore’s Temasek Holdings realigned its portfolio, and has generated a 1-year total shareholder return of 24.53% for the current fiscal year. Temasek reported a record net portfolio value of S$ 381 billion. This portfolio value figure is up S$ 75 billion over the previous year. The timing of the returns and asset values reflects the wide range of valuation in assets when the COVID outbreak gained traction globally vs. ongoing efforts to tame cases worldwide.

During the fiscal year ending March 31, 2021, Temasek invested S$ 49 billion and divested S$ 39 billion, record numbers on both counts. For Temasek it was an active year, despite pandemic lockdowns and travel restrictions. Temasek remains anchored in Asia, with having China representing 27% of its assets and 24% in Singapore. However, exposure to the Americas grew to 20% of the portfolio. The Americas region accounted for the largest share of new investments made during the fiscal year, followed by Singapore and China.

Sector
Sector-wise, Financial Services was at 24% of the portfolio, while Telecommunications, Media & Technology (TMT) was at 21%. These sectors remained the top two largest sectors of Temasek’s portfolio, especially with assets like SingTel. However, their compositions have changed significantly over the last decade, partly driven by the impact of digitization. Temasek also boosted exposure to life sciences and agri-food at the expense of consumer and real estate exposures.

Temasek continued making progress in the area of sustainable investing. One example is forming an asset management company called Decarbonization Partners together with Blackrock. BlackRock and Temasek are committing a combined US$ 600 million in initial capital. Temasek is also a direct investor in BlackRock stock.

Temasek also provided financial support to both Singapore Airlines and Sembcorp, which were impacted by the COVID outbreak. Temasek’s investments in the industrials & energy sectors included Eavor Technologies, a Canada-based company developing proprietary technology to harvest geothermal energy. Another investment was a follow-on investment in Assa Abloy, a company specializing in access and security solutions based in Sweden.