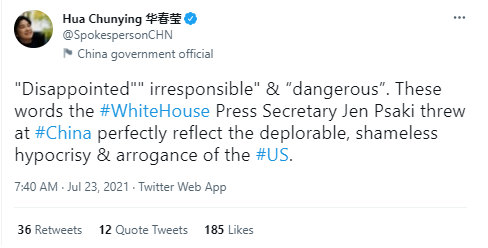 This is over the White House saying they were deeply disappointed with China’s decision to reject a WHO plan for second phase of an investigation into the origin of coronavirus.

China is cracking down on after-school tutoring companies.

3. The Israeli Health Ministry, which has previously estimated the true efficacy of the Pfizer COVID shot against the delta (Indian) variant at only 64%, while still more than 90% effective at preventing serious illness and death. The Israeli government is seeing the Pfizer COVID shot as only 39% effective at preventing infection with delta variant.

5. According to Coindesk, the State of Texas alleges Blockfi interest accounts violate laws.