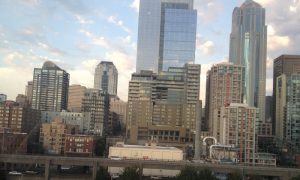 Boston Properties (ticker: BXP), a real estate investment trust (REIT), is acquiring Safeco Plaza in a US$ 465 million gross purchase. Boston Properties bought the building as part of its joint venture with Canada Pension Plan Investment Board and Singapore’s GIC Private Limited. Boston Properties would own up to 51% of the property. Safeco Plaza, previously 1001 Fourth Avenue Plaza and the Seattle-First National Bank Building, is a 50-story, 630-foot skyscraper in Downtown Seattle. Liberty Mutual, which acquired Safeco Insurance in 2008, is the building’s anchor tenant leasing 68 percent of the property. For decades, Safeco Plaza has been known as “the box the Space Needle came in.”

The deal is expected to close in the third quarter of 2021.

“Seattle has experienced high levels of population and rapid growth, given its expanding technology and life science employment base, and is much more affordable than other major technology markets, given no state of Washington income taxes, and lower real estate costs for both office space and housing rents,” Owen Thomas, CEO of BXP, said on the REIT’s third-quarter earnings call Wednesday morning.