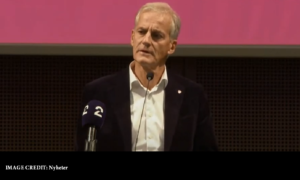 Norway’s Prime Minister Erna Solberg conceded after a major election defeat. She served as Prime Minister of Norway since 2013 and has been Leader of the Conservative Party since May 2004. Norway’s Labour Party, led by millionaire Jonas Gahr Støre, has won the country’s general election. The Labour Party and its two allies, the Socialist Left and the Centre Party, have declared victory. The euroskeptic Centre Party made the largest gains in the election by grabbing nearly 14% of the votes.

The campaign was dominated by questions about the future of the oil industry. This indicates an end of a center-right ruling coalition in Norway. Based on a preliminary count of nearly 93% of the votes, the Labour Party and its two allies — the Socialist Left and the Centre Party — would hold 100 seats in the 169-seat Stortinget assembly while the current government would get 68. The Conservatives former coalition partner, the Progress Party lost 3.4% points.

Under the Solberg administration, Norway fared will during the COVID-19 pandemic compared to the U.K., France, and Germany. Norway had one of the lowest COVID mortality rates in Europe. However, the opposition pushed on social inequality issues and the unpopular public sector reforms that led to her demise as PM.

Interestingly, Solberg’s conservatives and the Labour opposition both wanted a gradual move away from the fossil fuels that continue fuel the Norwegian economy. Norway is in the global top 7 exporters of crude oil. The oil and gas sector constitutes around 18% of Norwegian GDP and 62% of Norwegian exports in 2018. Norway is Western Europe’s most important source of natural gas.

Net-Zero
The writing was on the wall. In August 2021, the Governor of Norges Bank, Øystein Olsen (age 70), informed the Ministry of Finance that he wished to resign from his post in February 2022. Norges Bank oversees the country’s sovereign wealth fund – Norway Government Pension Fund Global – in terms of operations and investing through Norges Bank Investment Management. The sovereign fund is invested in around 9,000 companies all around the world. The largest geographical exposure is to Asia and North America, followed by developed markets in Europe and Oceania and emerging markets.

Norway Government Pension Fund Global could end up embracing selling oil and gas companies if they are unsuccessful in changing their core carbon intensive activities. This public equity exclusion strategy mimics some European investors. Beneficiaries of this could be shareholders of renewable energy companies, utility companies embracing renewable sources of energy, and EV companies like Tesla Inc. In addition, the sovereign wealth fund could make stronger inroads in competing for unlisted renewable assets globally, furthering competition against other asset owners and managers.

Expect More Aggressive Stances on Corporate Boards
Sovereign wealth funds historically have been disengaged from publicly-traded company boards due to a variety of reasons including being state-owned investors. Over the past decade, more sovereign investors have eroded this firewall and some have aligned themselves to principles aligned with other institutional investor groups based on certain issues such as climate change, labor rights, and executive compensation.

Norway’s sovereign wealth fund will likely be influenced by more socialist-friendly policies and could change the way it votes on corporate boards. Indirectly, Norway’s sovereign wealth fund could exert pressure on oil and gas companies globally to be more activist like their peers such as CalPERS, CalSTRS, and APG Asset Management. Oil companies could be expected to require more company disclosures and their impact on carbon emissions.

Norway GPFG’s largest equity holdings
In millions of kroner as at June 30, 2021.