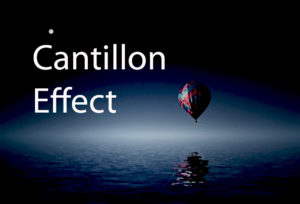 What is the Cantillon Effect and Why It’s Even More Important Now?

A Cantillon effect is a change in relative prices resulting from a change in money supply. It is the uneven expansion of the amount of money. 18th century French banker and philosopher named Richard Cantillon coined the term. Born in the 1680s, Richard Cantillon penned the book, “Essai sur la Nature du Commerce en Général” (Essay on the Nature of Trade in General) – also referred to as (An Essay on Economic Theory). Cantillon preceded Adam Smith by a generation.

Since the 2000s, as the world’s largest central banks started to run out of policy tools (lowering interest rates), many are aggressively creating new money during each major financial crisis. The current status of the U.S. economy is experiencing inflation expanding during the Biden administration at record levels, resulting in increase in prices that are occurring in energy, blue collar labor, and food, but not in other products and services.

With the creation of the U.S. Federal Reserve and the U.S. exiting the gold standard, the Cantillon effect has favored investors and owners over workers (wage-earners) in the aggregate.

Be Close to the President and Congress
Cantillon also had a theory in which the beneficiaries of the state creating the currency is based on the institutional setup of that state. This essentially means, “he who was close to the king and the wealthy”, likely benefitted from the distributional choices of currency through the system. Since the 1950s, most of the world has adopted Keynesian style central banks and monetary authorities. In times of financial crises, these central banks are used to increase the money supply and use the large banking institutions and capital market players to “distribute” capital (lend), calm markets, and prevent bank closures. Time and time, it is clear the in case of the U.S. capital markets, many of the major U.S. banks, large private equity houses, and Wall Street fair well after these central bank QE measures, while individual U.S. savers often witness jumps in inflation in various goods and services. Larger financial institutions get access to the QE money and make investments and lend money out. Prices start to rise before the populace has not received any of the new money yet. Chanting of the phrase by various heads-of-state of “Build Back Better” can essentially mean who gets the new money out of the crisis and where shall that capital be allocated.

By analyzing, the current U.S. financial and economic system, tech companies like Amazon.com, which lobby the U.S. government, and U.S. airlines, benefitted tremendously from the U.S. CARES Act. This can be said of other governments across the world as well. The COVID pandemic was a boon for the ultra-rich, according to the World Economic Forum.

Interestingly, with the passage of the CARES Act in 2020, which had PPP loans for small businesses and forms of universal basic income (UBI), it stayed off citizen pain as government COVID lockdowns impacted select businesses’ livelihoods. In return of UBI on a massive scale in the U.S., disincentives for labor and excess money have flooded markets.

While the Federal Reserve is now preaching about the risks of U.S. income inequality and climate change, which is interesting as their QE policies have clearly widened the income gap, what policies can be used to mitigate the Cantillon effect? How are institutional investors, such as sovereign wealth funds and public pension funds, anticipating winners and losers?