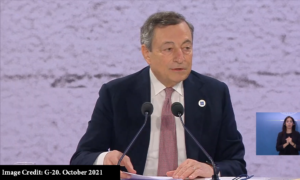 The G-20 or Group of Twenty, one of the world’s foremost diplomatic events, is an intergovernmental forum comprising 19 countries and the European Union. The G-20 convened in Rome (the Eternal City) and the big topic was how to combat climate change. Can each government collectively work together on trying to lower the average temperature on planet Earth? The consensus goal is to prevent global temperatures from rising by more than 1.5 Celsius above preindustrial levels. Britain’s Prince Charles told members at the G-20 that, “The future of humanity and nature herself are at stake.”

After the G-20, world leaders are heading to Glasgow, Scotland for COP26 (26th United Nations Climate Change conference), a 12-day event. From the perspective of many international reporters, the G-20 agreement appears to mimic the 2015 Paris climate accord. The consensus G-20 reports that they “remain committed to the Paris Agreement goal to hold the global average temperature increase well below 2 degrees Celsius and to pursue efforts to limit it to 1.5 degrees Celsius above pre-industrial levels.”

Greenpeace International’s Executive Director Jennifer Morgan lambasted the the G-20 agreement as “weak”. She added in a statement, “if the G20 was a dress rehearsal for COP26, then world leaders fluffed their lines.”

Rinse and Repeat
G-20 leaders have reached some consensus on halting the public financing of coal-fired power plants outside of their own country, but did not set a target to end coal use domestically. China and India are two major users of coal and other types of fossil fuels, which are also major world economies. China is the world’s largest emitter of fossil fuel carbon dioxide. The question put on repeat for each forum is who pays the tab for “climate transition” moves or decarbonization efforts, while fossil fuel prices like oil and gas rebound globally. Likely, the United States and European Union will pay the freight, given the amount of “debt” or fiat money these countries have created to fund such endeavors. In a perverse manner, the progressive cessation of oil and gas production, has benefitted sovereign wealth funds and oil and gas companies bottom lines. Many sovereign wealth funds derive their wealth from oil and gas extraction including Norway Government Pension Fund Global, Abu Dhabi Investment Authority, and the Kuwait Investment Authority. Yet these countries only see growth in SWF from either investment returns or higher prices of fossil fuels. For example, Saudi Aramco’s earnings soared as oil prices and production climbed, which benefits Saudi Arabia’s Public Investment Fund (PIF).

At the G-20, some sort of deal on climate change was struck, but the meeting foreshadows the big COP26 meeting, where corporations, institutional investors, and other governments are poised to showcase their ambitions and tactics on combating a changing climate on planet Earth. Furthermore the absence of world leaders of China, Russia, Japan, and Mexico and the replacement of lower-level ministers dispatched in their places showed that the event was not impactful.

OPEC+
The Biden administration has been pleading with the world’s top oil producers to lower oil prices by increasing production. This has not worked, as OPEC+ regained control of global oil prices. The U.S. and Europe have been waging an intense diplomatic campaign to persuade OPEC+ to speed up its oil extraction output increases past the 400,000 barrels per day. OPEC+ executives meet virtually on November 4, 2021, to decide its policy. At the same time, the President Biden halted the Keystone pipeline after he was sworn-in and the majority of his party continues to attack U.S. oil and gas producers through media statements, proposed policies, and threats of subsidy removals. Since 2021, crude oil has crept up from bargain-basement lows to first reaching US$ 50 per barrel, then US$ 75 per barrel, and now more than US$ 85 per barrel of oil.