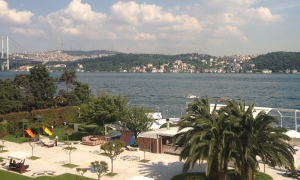 AD Ports Group (Abu Dhabi Ports Group) is owned by the Abu Dhabi Developmental Holding Company PJSC. AD Ports Group signed a strategic partnership agreement with Turkiye Varlik Fonu (Turkey Wealth Fund) to collaborate on major investment opportunities for port development and operations, and to coordinate efforts to examine other logistics-related investment projects within Turkey. The ceremony was held in Turkey. Under the terms of the agreement, the two organizations will collaborate in exploring and examining a range of opportunities for investments in Turkey, establishing a joint steering committee to assess all investment opportunities and foster trade ties between the two parties. The agreement will strengthen AD Ports Group position as a leading integrated ports and logistics entity in the region and will increase trade between the United Arab Emirates and Turkey. AD Ports Group manages 11 ports and terminals in the UAE and Guinea.

Turkey has a population of around 85 million people.

Erdogan Banking on Export Growth
Following the dismissal of three central bank governors within the span of two years, Turkish President Recep Tayyip Erdogan defended his central bank’s continued interest rate cuts amid rising double-digit inflation. The pressure by Erdogan instructed ​Turkey’s central bank to cut rates by 400 basis points over the past three months despite inflation reaching new highs. Inflation in Turkey is now near 20%. Turkey is facing net capital outflows by foreign investors and increasing rates of U.S. dollarization by its citizens. The one silver lining for Turkey is the ability for more exports, which is why this port deal is interesting. Erdogan hopes that growing exports combined with import compression will move the current account balance into surplus.