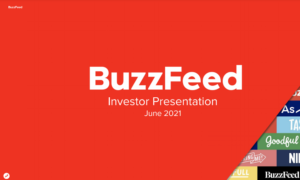 Money-Losing ClickBait Site BuzzFeed Goes Public via SPAC, Is this a TOP?

Digital media company BuzzFeed made its public debut. The company trades under the ticker “BFZD” and is known for its clickbait content, lists, and quizzes. 890 5th Avenue Partners Inc is the SPAC that took Buzzfeed public. BuzzFeed expects to raise just US$ 16 million from its offering after 94% of the US$ 287.5 million raised by the SPAC was pulled by investors, according to an updated SEC filing.

Digital media investors in the 2010s are trying to list their struggling digital media companies using SPACs. Group Nine’s SPAC went public in January 2021, but there is no deal. TPG-backed Vice Media stalled on entering the public markets.

Buzzfeed generates zero profits. In the nine months ended September 30, 2021, Buzzfeed had a net loss of US$ 15.696 million and for the corresponding period in 2020, the net loss was US$ 21.141 million. Unlike Lucid Air and other EV SPAC-based companies, what future growth does Buzzfeed have? Buzzfeed has been around for quite some time.

Huffpost
On February 16, 2021, BuzzFeed completed the acquisition of 100% of HuffPost, a publisher of online news and media content, from entities controlled by Verizon Communications Inc. BuzzFeed co-founder and chief Jonah Peretti had worked at Huffpost before starting BuzzFeed. BuzzFeed issued 21,170,037 shares of non-voting BuzzFeed Class C common stock to an entity controlled by Verizon, of which 8,625,234 were in exchange for the acquisition of HuffPost and 12,544,803 were in exchange for a concurrent US$ 35.0 million cash investment in BuzzFeed by Verizon, which was accounted for as a separate transaction.