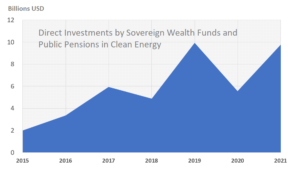 According to SWFI transaction data, sovereign wealth funds and public pension plans plowed capital back in 2021 toward renewable investments. Influenced by the 2015 Paris Agreement, a number of global asset owners have aligned capital commitments toward clean energy transition goals set by various nations. In 2021, sovereign wealth funds and public pensions directly invested US$ 9.77 billion in clean energy investments compared to US$ 5.56 billion in 2020, and US$ 9.94 billion in 2019. These amounts do not even reflect limited partner commitments by global swfs and pensions into funds like the Brookfield Global Transition Fund and the TPG Rise Climate Fund. The COVID-19 pandemic took a toll on clean energy investments for asset owners, as wealth funds focused on the risk elements of their portfolios and acted opportunistically in various markets such as listed equities, real estate, private equity, and in some rare cases cryptocurrencies. Some sovereign funds had to bailout or provide financial support to industries such as airlines in 2020. 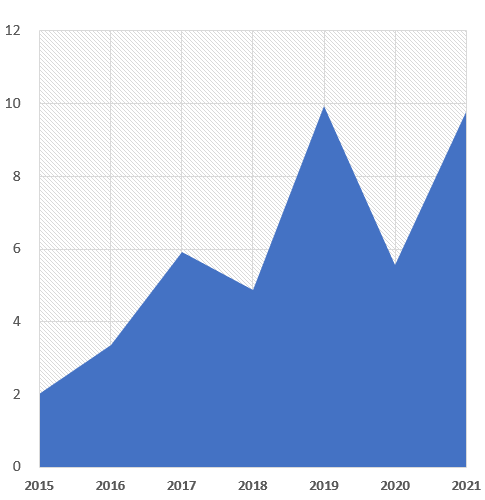 Canadian public pensions made large strides into renewables, while winding down some fossil fuel investments. For example, in 2021, Ontario Teachers’ Pension Plan scooped up a 50% non-controlling interest in an approximately 2,520 megawatt portfolio of long-term contracted renewables assets from NextEra Energy Resources, LLC, a subsidiary of NextEra Energy, Inc. Asset owners have been acquiring portfolios of wind and solar assets that have been materialized from utility companies and other smaller-scale players. Thus, the recycled capital gives the solar or wind developer additional firepower to create new renewable investments. Canadian pensions play a role in renewable energy in emerging markets as well. Many public pension fund investments into renewables for 2021 aimed at investment in the Australia and New Zealand area, the United States, and Western Europe. Smaller amounts of capital have been sprinkled across Asia, India being a major beneficiary. Recently, OMERS Infrastructure signed a deal to acquire from International Finance Corporation and IFC GIF Investment Company I an approximately 19.4% stake in Azure Power Global Limited (NYSE: AZRE), for a total consideration of approximately US$ 219 million. Founded in 2008, Azure Power is an independent renewable power producer located in India.

Renewable energy investors are keeping tabs on the institutional investor giant in the room and Norway Government Pension Fund Global (GPFG) is managed by Norges Bank Investment Management (NBIM) and they have an allocation to renewable infrastructure. In 2021, NBIM acquired a 50% interest in the Borssele 1 & 2 offshore wind farm located in the Netherlands. NBIM coughed up €1.375 billion for the stake.

In a pair of letters to Norway’s Ministry of Finance, NBIM officials wrote that they support an official proposal that the wealth fund adopt a long-term net-zero climate emissions target for its public equities. NBIM also requested to the government to be allowed to make its own decisions on climate exclusions rather than defer to its Council on Ethics.

Other sovereign wealth fund deals in renewables are more opportunistic, being on the venture side of pendulum. For example, Rolls-Royce Small Modular Reactor (Rolls-Royce SMR Ltd) is a business that was formed in November 2021 to bring forward and deliver at scale the next generation of low cost, low carbon nuclear power technology. The Qatar Investment Authority (QIA) joined a group of investors in December 2021 and invested £85 million in Rolls-Royce Small Modular Reactor for a 10% equity stake.

Various think tanks believe sovereign investors can play a key role in helping large countries reach netzero emissions by 2050. 2022 could prove to be another eventful year in the green investment space.