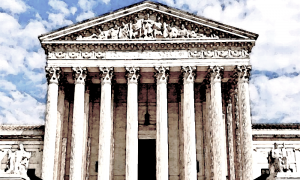 The vaccine-or-test rules faced a raft of lawsuits from 27 states with Republican attorneys general or governors, private businesses, religious groups and national industry groups such as the National Retail Federation, the American Trucking Associations and the National Federation of Independent Business.

However, the court is allowing the administration to proceed with a vaccine mandate for most health care workers in the U.S.

“Although Congress has indisputably given OSHA the power to regulate occupational dangers, it has not given that agency the power to regulate public health more broadly. Requiring the vaccination of 84 million Americans, selected simply because they work for employers with more than 100 employees, certainly falls in the latter category.”

PER CURIAM.
“The Secretary of Labor, acting through the Occupational Safety and Health Administration, recently enacted a vaccine mandate for much of the Nation’s work force. The mandate, which employers must enforce, applies to roughly 84 million workers, covering virtually all employers with at least 100 employees. It requires that covered workers receive a COVID–19 vaccine, and it pre-empts contrary state laws. The only exception is for workers who obtain a medical test each week at their own expense and on their own time, and also wear a mask each workday. OSHA has never before imposed such a mandate. Nor has Congress. Indeed, although Congress has enacted significant legislation addressing the COVID–19 pandemic, it has declined to enact any measure similar to what OSHA has promulgated here.

Many States, businesses, and nonprofit organizations challenged OSHA’s rule in Courts of Appeals across the country. The Fifth Circuit initially entered a stay. But when the cases were consolidated before the Sixth Circuit, that court lifted the stay and allowed OSHA’s rule to take effect. Applicants now seek emergency relief from this Court, arguing that OSHA’s mandate exceeds its statutory authority and is otherwise unlawful. Agreeing that applicants are likely to prevail, we grant their applications and stay the rule.”