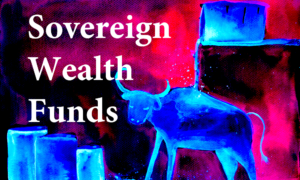 Sovereign wealth fund CEOs and CIOs have sounded the alarm of global inflation concerns as being somewhat permanent. SWFI transaction data, as well as SWFI survey responses, show proof on how and why these global asset owners moved toward real asset investments to hedge against inflation over the past year. Sovereign investors have shifted tens of billions from offices and retail properties toward logistic properties and apartments. Some SWFs even dabbled in cryptocurrencies and blockchain technologies in a bid to diversify from fiat currencies.

GIC’s Approach
As Singapore’s GIC Private Limited turns 40, they have three problems unfolding with regard to their massive investment portfolio. First, the Asian sovereign investor will be taking on more funds to manage and the challenge of more AUM is finding ways to put that capital to work, to earn returns greater than inflation. Second, how will GIC deal with global inflation in the medium term? Third, GIC is balancing its geographical asset allocation between two giants – the United States and China. At the Beijing Olympics, Russia’s Vladimir Putin and China’s Xi Jinping declared a “new era” in the global order and both endorsed respective territorial ambitions over Ukraine and Taiwan. The United States is prepping possible military action if Russia invades Ukraine, while Germany and France are advocating for peace and calm. Even though GIC has agreed to the Santiago Principles, the sovereign wealth fund is secretive and has refused to publish any official figures regarding their assets under management. Since 2008, SWFI has put out estimates on GIC’s size and with new legislation, GIC could be managing even more money from the country’s central bank. SWFI has also analyzed and studied the investments GIC partakes in. In recent times, GIC positioned itself to invest in data centers and logistics in the U.S. and Asia, while hunting for office discounts in Australia. GIC is planning to establish an office in Sydney around the middle of 2022. According to SWFI transaction data, from 2018 till the end of 2021, US$ 43 billion was invested in the real estate sector, excluding fund commitments. 39.7% of those direct transactions were aimed at logistics and warehouses. GIC’s real estate unit has a portfolio covering over 40 countries in property sectors such as offices, retail, hotels, residential, industrial, niche sectors, and companies.

39.7% of those direct transactions were aimed at logistics and warehouses.

On the fixed income side of the book, GIC has engaged in more aggressive types of fixed income investing such as direct lending. Sovereign investors are taking more bets on rental-linked commercial mortgage-backed securities and emerging market debt. With regard to emerging market debt, a stronger U.S. dollar means that goods that the U.S. is exporting are going to be more expensive. If inflation expectations are not well anchored in these countries, they could feel more currency depreciation. For more than two decades, consumer price inflation has been running at its highest level for the world’s largest industrial economies. The annual pace of price growth touched 7% in December 2021 up from just 0.1% in May 2020. For the U.S. and Europe, high inflation and a tight labor market has forced sovereign investors to seek out real estate assets and renewable infrastructure.

Steering the Mega Ship
The world’s largest sovereign wealth fund is Norway Government Pension Fund Global, which is managed by Norges Bank Investment Management (NBIM). NBIM has worried about oil companies in its portfolio and the risk these companies possess. However, the price of Brent crude oil has seen a clear break above the 2018 and 2021 highs, giving life to both the sovereign wealth fund’s inflows and the oil majors. For now, the decarbonization worries turned out to be misplaced. Shares of Exxon Mobil Corporation, the largest American oil company, have risen in 2022, as the oil giant has seen a rush in revenue growth. Exxon disclosed it earned US$ 8.9 billion in the three months that ended in December 2021 on revenue of US$ 84.9 billion. For the year, Exxon earned US$ 23 billion, compared with a loss of US$ 22.4 billion in 2020.

Norway’s SWF owns around and on average 1.5% of every listed company in the world, minus companies that are excluded from the portfolio. Norway GPFG has seen stocks as a potential against inflation, but could be moving more toward infrastructure as an equity pullback could occur if the Federal Reserve agrees to actually conduct rate hikes.

The strategic development sovereign wealth funds of Mubadala Investment Company, Saudi Arabia’s Public Investment Fund, and Temasek Holdings are continuing to support renewable energy investments including green hydrogen. Investments in the ESG space continue to increase for sovereign investors compared to 2010 figures. However, sovereign funds could also move capital toward oil and natural gas if energy prices continue to rise, as many Gulf sovereign funds are supported by the fossil fuel industry.

All in all, sovereign investors will likely continue to flood capital in real assets in a bid to preserve wealth, while moving money in and out of equities from the tunes played by central banks.