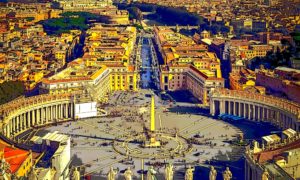 Some changes in the new constitution include permitting any baptized lay Catholic, including women, to head most Vatican departments under a new constitution for the Holy See’s central administration. For centuries, the departments have been headed by male clerics, usually cardinals or bishops. The Roman Curia comprises the administrative institutions of the Holy See and the central body through which the affairs of the Catholic Church are conducted

Earlier and Current Reforms by Pope Francis on Finances
On February 24, 2014, Pope Francis issued the Apostolic Letter Fidelis dispensator et prudens establishing the Council for the Economy to oversee the administrative and financial structures and activities of the dicasteries of the Roman Curia. It also established the Secretariat for the Economy as a dicastery of the Roman Curia. Such reforms by Pope Francis include removing control of Church assets and funds from the Secretariat of State and transferring them to the Administration of the Patrimony of the Apostolic See (APSA), or putting them under watch from the Secretariat for the Economy. Some Vatican assets were scrutinized in a controversial 2018 London deal, which is at the core of a Vatican city criminal trial. Early in 2022, the prosecution estimated that the Holy See had lost 217 million euros in the mismanaged property deal.

The Secretariat for the Economy carries out the function of the Papal Secretariat for economic and financial matters and exercises a special control over the Pence of St. Peter and over the other papal funds.

In the Praedicate Evangelium change, the Council for the Economy retains oversight of nearly all Vatican financial policies and affairs. In addition, the Holy See’s financial units are listed separately from the dicasteries of the Roman Curia.

History of Reforming the Curia
Sixtus V reformed the curia in 1588, Pius X did so in 1908, Paul VI reformed it after the Second Vatican Council in 1967, and John Paul II introduced the last reform in 1988.

Keywords: Administration of the Patrimony of the Apostolic See.