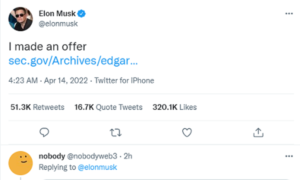 Elon Musk launched a US$ 41.39 billion bid to buy Twitter, Inc., saying the proposed deal is part of his plan to bring “free speech around the globe.” Musk’s offer price of $54.20 per share comes just days after he rejected a seat on Twitter’s board, represents a 38% premium to Twitter’s April 1 close. Elon Musk holds 73,115,038 shares or 9.13% of Twitter. Vanguard Group remains the largest shareholder of Twitter at 82,403,665 shares, or 10.29%. The share figures are based off SEC data. 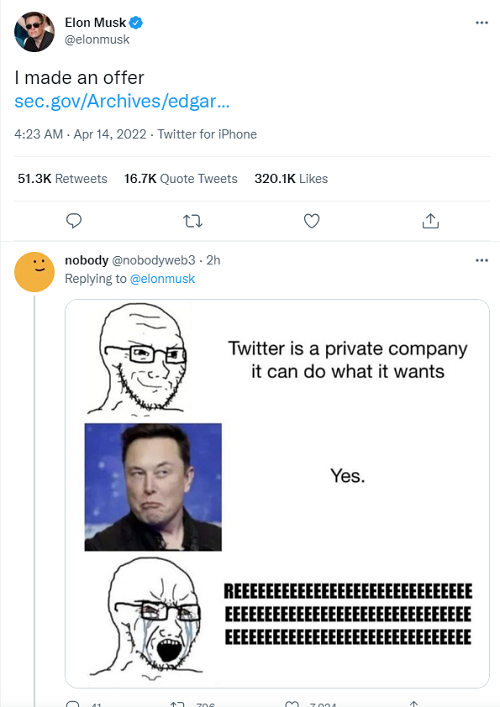 Hours later……Al Waleed bin Talal Al Saud, a Saudi Arabian billionaire and Chairman of Kingdom Holding Company (KHC), tweeted, “I don’t believe that the proposed offer by @elonmusk($54.20) comes close to the intrinsic value of @Twitter given its growth prospects. Being one of the largest & long-term shareholders of Twitter, @Kingdom_KHC & I reject this offer.” 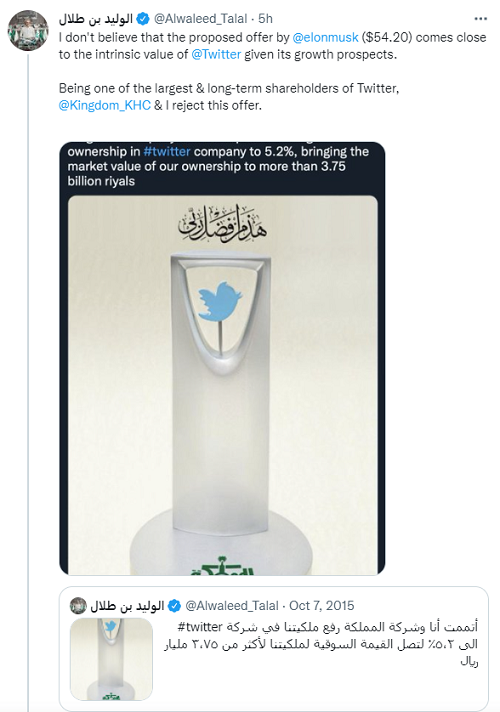 Elon Musk then tweeted back…. 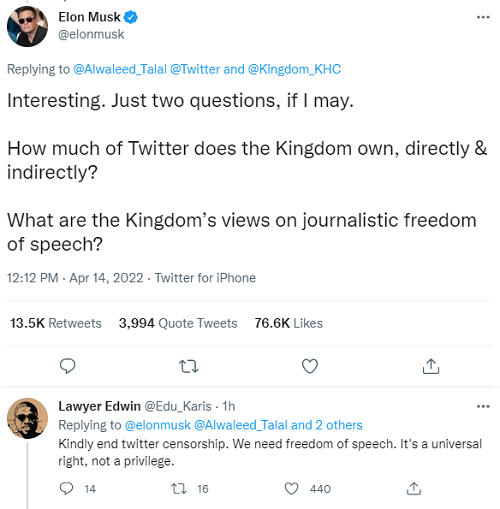 Chairman of the Board,

I invested in Twitter as I believe in its potential to be the platform for free speech around the globe, and I believe free speech is a societal imperative for a functioning democracy.

However, since making my investment I now realize the company will neither thrive nor serve this societal imperative in its current form. Twitter needs to be transformed as a private company.

As I indicated this weekend, I believe that the company should be private to go through the changes that need to be made.

After the past several days of thinking this over, I have decided I want to acquire the company and take it private.

I am going to send you an offer letter tonight, it will be public in the morning.

Are you available to chat?

1. Best and Final:
a. I am not playing the back-and-forth game.
b. I have moved straight to the end.
c. It’s a high price and your shareholders will love it.
d. If the deal doesn’t work, given that I don’t have confidence in management nor do I believe I can drive the necessary change in the public market, I would need to reconsider my position as a shareholder.
i. This is not a threat, it’s simply not a good investment without the changes that need to be made.
ii. And those changes won’t happen without taking the company private.